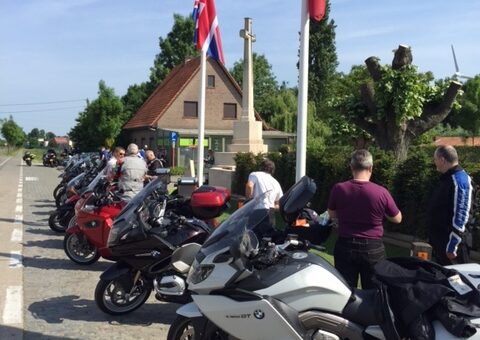 Saturday 29th April Sat Nav Experts User Group: What is it…….: The aim of the meeting was to set up a Satnav Expert User Group (EUG) that can help BMW Club Oxford Section Members to use their navigation devices more effectively. The meeting was held at North Oxford Garage (NOG) to take advantage of the involvement of the BMW Dealership who supply the devices and resolve problems their customers have in using them. 11 people attended with a further 2 unable to attend so we have a full complement of people happy and willing to help. We are currently planning a survey to gather the most common issues / questions however feel free t send your ideas to dave.tomlison@bmwoxford.com

Gotta be the perfect day for the first bike run of the season!

Feeling lonely at 7.45 am empty car park, one clean and keen GS poised ready to go.

Didn’t have to wait long as bikes from far and near lined up for take- off. After a hearty breakfast (somewhat delayed, but worth waiting for) a quick pre –ride chat with the riders and pillions of 28 varied bikes and some indication as to destination for this mystery tour.

(It was only a mystery tour because I didn’t have a clue where we were going!) God bless sat nav!

Several of the riders were on their first group ride, where others had not been long in the saddle, so they benefitted immensely by following the guidance of the experienced riders around them.

Apparently Daffyd (our tail end Charlie) had been sent on a search mission to locate a rider and pillion that had drifted into a housing estate in error. Only to realise they were not part of our expedition crew but merely locals returning home.

Having instigated the ‘2nd man drop off’ system with a gentle mix of the ‘Buddy System’ to hopefully eradicate losing bikes while we flowed around Salisbury ring road destined for The New Forest.

A few miles later after some 90 plus minutes of saddle support we enter the almost Nordic woodlands of New Forest principle town Lyndhurst, here we encounter the ‘holidaymaker’ traffic so I guided the troops away from the four wheeled frenzy through a wooded loop straight back into (yep you guessed it) the same blooming traffic queue!

Must have been circa twenty minutes of waddling the bikes inch by uncomfortable inch till the (not for feint –hearted) chappies surged through a gap onto the grass verge and wiggled along breaching the car block and hitting the tarmac ‘yellow brick road’ into the heart of Lyndhust .

All in need of a rest period we encircled the fully occupied car park into the coach park where we managed to squeeze the remaining riding crew on the peripheral boundary of the coach park for that well deserved rest just as the sun makes an appearance.

A few weary travellers roll off their steeds looking like ‘john Wayne’ with a severe case of haemorrhoids, well in their defence it’s the first and longest ride since the winter break.

1 always ensure that all bags are secure and done up

3 it’s blooming embarrassing to have to pick bike up in front of a sympathetic crowd.

By now my Knight in shining armour Daffyd swapped places with me for the remaining 4 miles on the correct route (the one my sat nav was insistent that I should be on) to the panoramic vista at Cliffhanger Café.

Ample parking (even if some of it was ignoring ‘no parking’ signs), plenty of seats inside the restaurant, outside seating or even on the grassy banks.

With our somewhat smaller group now we backtracked towards Salisbury via Ringwood except on this occasion I surpassed my expectation by inadvertently following signs for Ringwood that took us away from the main dual carriageway drag through idyllic villages and beautiful rural surroundings. lubbly jubbly !

As we exit the town the countryside expanse just opens up before us and the tarmac in front weaves between open fields, ancient burial mounds and isolated farm buildings.

At Beckampton roundabout we perform the impressive Red Arrows bomb burst where we all split to our homeward route, lucky me of course I get the best ride back through Avebury between the Neolithic stones and the not so old Red Lion pub.

What a brilliant day’s entertainment with great friends, good weather, dry roads, beautiful scenery and a new adventure etched into my (and a good few others) memory bank!

Sunday 21st May, The Oxford branch of the BMW motorbike club arrived in Stow for a pre-planned visit to Rohan Stow. Resplendent weather and the lush rolling hills of the Cotswolds made for a very pleasant ride from the start point in Oxford. Without doubt, the promise of KK’s famous homemade Lemon drizzle and Carrot cake was very much ‘the icing on the cake’ (excuse the pun!). After the cake had been enjoyed, those present started stocking up on Rohan for pending Motorbike trips in the UK and Europe. The lightweight, quick drying and packable nature of Rohan is ideal when space/weight limitations apply, such as on two wheels.

14th May we had an excellent ride out to Cheddar Gorge with Frank Butler leading the charge.

26 – 29th May: With the 100th anniversary of the 1st World War being remembered over the next year, it is very appropriate that the section has a visit to Ypres. 43 people and 29 assorted bikes met on Friday at the Albion Hotel in Ypres, which has an excellent location, minutes from the Grand Place and the Menin Gate. After unpacking a few made the journey to see the daily act of homage which was a very moving experience and very well attended.

The following day saw 18 bikes meeting with Patrick and Nadine in the Grand Place. Patrick and his lovely wife had offered to be our local guides for the weekend and with Andy Lawson in charge had put together a full weekend of activities, routes and places to visit together with a very warm welcome.

The weather was absolutely amazing reaching 31 degrees Celsius all weekend, thank goodness, we all packed some water….

Our first stop was the trenches of death http://www.visitflanders.com/en/things-to-do/attractions/top/trench-of-death-diksmuide.jsp, this was reached by an amazing set of small D roads providing an excellent riding experience.

Patrick had then organised a visit to the local bike museum, café, bikers haunt for lunch and a guided tour around the museum by the owner himself, Johan Schaeverbeke, he has all kinds of trivial facts about Vespa and Lambretta, the English autocycles, the priest mopeds, or the tricycles from Poirier a very impressive collection of motorcycles and worth a visit if only for the humour of the owner! https://sites.google.com/grd.be/eng/museum

The museum holds a collection of about 100 motorcycles, scooters and mopeds from the period 1914~1980, packed with lots of decorations and utensils from the “good old days”. Beside the well-known Belgian trademarks such as FN, Flandria, Gillet, you will find extra-ordinary bikes like La Mondiale cc build in Vilvoorde (B), the Praga BD 500cc (CZ), the Gnom (D) and American Whizzers…

On the return to our hotel, we stopped off to see the Black Watch memorial at Black Watch corner, one of the many memorials in the area.

We met Patrick and Nadine as was normal at 9.30 in Ypres Grande Plass and rode in convoy to the Essex Farm Cemetery, this was an advanced first aid post and gave an amazing insight into the life and times of the medical cops who were supporting the troops behind the front line: http://www.wo1.be/en/db-items/essex-farm-cemetery

The site of the largest of the 19 mine explosions detonated to signal the start of the Messines phase of Third Ypres, the ‘Pool of Peace’ – Spanbroekmolen – was formed by a 91,000lb ammonal explosion set off at 0310 on 7 June 1917 underneath one of the then highest German front-line positions on Messines Ridge.

Work began on laying the mine in December 1916 and continued right up until a few hours before the mine was detonated, when the actual charge was placed and primed.

In February 1917, German countermining had damaged the main tunnel and much work had to be done to drive forward a new tunnel.

The Messines offensive was preceded by a seven-day offensive bombardment.

Nine divisions of infantry advanced upon a 9-mile front.  All 19 mines were blown at 0310.  The Spanbroekmolen mine went up 15 seconds late, killing infantry who had already begun to advance and who had been instructed to advance whether the mine exploded or not.

The sound of the 19 mine explosions was apparently heard as faraway as Dublin, and in Downing Street itself.  It was considered the loudest man made sound until that point.

The attack was a huge success, leaving the opposing German forces stunned by the nature and force of the offensive.  The Allies made significant gains during that first day. http://www.firstworldwar.com/today/poolofpeace.htm

We then travelled a few kilometres to a farm where a BBQ had been organised by Patrick and Nadine and a few of his friends, we were made very welcome and the food was excellent.

Our final destination was the beautiful Passchendaele Museum. It was at this location where in 1917 more than 400,000 soldiers perished for a territorial gain of only a few kilometres. The museum goes down more that 10 m so that you can experience the dugout complexes that both sides constructed and the trench warfare system.

Our final evening was completed with an excellent evening meal and another visit to the daily act of homage this time assisted by the piers and bands of the Canadian Transport System, this really is a world-wide phenomena.

Our thanks must go to Rosemary and David Hicks who organised the trip, to Andy Lawson who organised the day trips with our local friends and of course to Patrick and Nadine who really made the weekend work very well. They are happy to be contacted if you need any help in the Ypres area:-

The final day we said our goodbyes and made our way home by an exceptionally well organised Channel Tunnel, a first for me! We were met at the tunnel exit by some showery rain that chased all the way back to our respective homes.