BMW CLUB OXFORD SECTION AUSTRIA JUNE 2016
Over 40 intrepid members of the BMW Club assembled at the Hotel Weisseespitz in the Austrian Tyrol. Some had to come by car for various reasons, but the rest rode all the way from Blighty and back. Sadly, Martin Skennerton suffered an accident in Germany on the way down so couldn’t join us. He is now home and on the mend and we all wish him well.
What follows is my experience of the trip. Not all of us rode down together. Neither did we all ride in one large group on the same routes each day. If you read on for what follows you will realise why I keep saying “I am not the Tour Guide”. 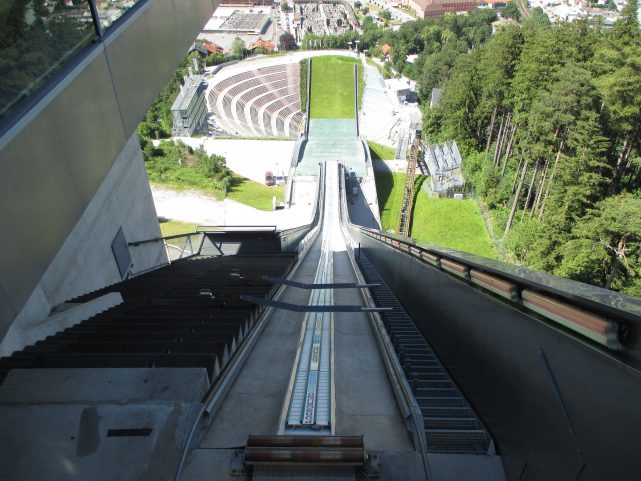 The Ski Jump at Innsbruck: I’m not doing that one thanks!

I did not want to rush the journey to Austria using only one overnight stop. A “Head down, Bum up” approach is not really my thing. I am happy to ride in a spirited manner when the opportunity arises, but to cover 800 ish miles at a gallop – no thanks!
Day 1: There were eight bikes plus a car booked on the 10.06 shuttle from Folkestone. Despite our best intentions and early arrival at the terminal. the M20 was rammed with cars and minibuses trying to catch a train. England were due to play in the Euro 2016 footie competition the same afternoon and the world and his Grandad had turned up. Added to this the French customs were apparently not operating with “entente cordiale”. We were lucky. We managed to filter past the worst of the traffic and a kind hearted marshal in the terminal holding area promoted us onto a train sooner than we might have caught. Overall delay about one hour. Not too bad compared with other stories we heard of.
Once through the tunnel, we joined the A26 for the ride down to Reims. The original plan had been to call in at café le Tommy in Pozieres near Albert for refreshment, but in view of the delays and impending bad weather, we decided to stick to the Peage. One member suffered a tyre blowout and required rescue, a new tyre and consequent delay. The rest if us split into smaller groups to enjoy appropriate speeds along the AutoRoute. Rob and I stopped for a snack at the services and met Eddie and Norma who were travelling by car. Our group finally met up in Reims at the hotel just before a deluge of biblical proportions was launched. A few beers and a meal soon put the world to rights and then off to bed at the end of 350 miles or so.
Day 2: Rob and I had gone the slow route into Reims and still required petrol before we set off. Once tanked up we then caught up the rest of the group on the excellent D994 cutting off the corner between Chalons and Ligny-en-Barrois. This is described on my map as “Ancienne Voie Romaine” and it certainly was very straight after the first few villages. Much more pleasant riding than belting along dual carriageways. The open road enabled us to make good progress to Bar-le-Duc and eventually onto the N4 towards Nancy. We stopped at Toul services for lunch.
Sadly, the writer managed to lead the pack astray shortly after lunch. Digestion upsetting concentration perhaps? Maybe they will just stop following me in future? Anyway, I missed the slip road for Luneville and we took a scenic motorway diversion round Nancy and back before joining the A33. We rode sedately at around 110kph on the lovely stretch of dual carriageway all the way to St Die des Voges. Geoffrey once again proved a challenging leader to follow in town, but eventually we found parking at the station and refreshment in a café nearby. The route after St Die was via the Col du Bonhomme and down to Colmar. We crossed the Rhine with hydro schemes and canal as well as the river and it seemed enormous. There was plenty of water coming through at some pace probably after all the heavy storms in recent days. We eventually reached Freiburg and found our humble hotel for the night. What an amazing place. Perched on a hilltop overlooking the city, our hotel had a fantastic restaurant with attentive English speaking waitresses. 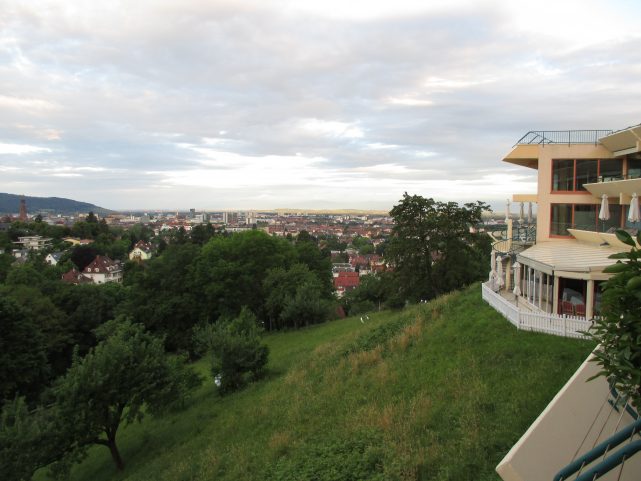 Freiburg: our humble hotel for the night!

Day 3: I tried very hard to lead us all to a suitable fuel station, but only two bikes managed to follow. The three of us fueled and waited, but of the others no sign. We set off along the B31 heading through the southern part of the Black Forest near lake Titisee and eventually caught up the others. Rob and I left the group and after spiritedly sampling unrestricted parts of the Autobahn system, we stopped in Friedrichshafen for lunch where we encountered another fine waitress with excellent English. We then rode to the Austrian border and joined their excellent motorway network. I lost count of the number of tunnels we used, but thought that having purchased our vignettes we had effectively paid our motorway tolls in Austria. Emerging from the longest of these tunnels we were faced with a toll booth and a request for €9.50 each. More surprising was the fact that the toll for cars was exactly the same as for motorcycles. We stopped at the next services and sat down for a cup of coffee when another couple of bikers came in. “Are those your BMWs outside? We are heading for the Hotel Weisseespitze – how about you?” The couple were Chris and Hazel Bullock of London Section who were due to join our group. Well met! We then carried on and fairly soon arrived at our hotel.
On Sunday, our first whole day, the weather was wet and unpromising. Several of us went for a walk in search of coffee, Ice Creams or Apple Strudel.
Monday was much better weather. We split into small groups to ride Charly’s routes. Most of us attempted tour 7 “Arlberg – Rundfahrt”. Apologies to my team as we started through some tedious roadworks in Landeck towards Innsbruck. I checked and we were following Tour 12 in error. Reversal through roadworks, abandon satnav instructions and follow nose seemed to work much better. Apparently all the other groups were having difficulties with this route, but all enjoyed it. The route was great fun to ride but there were some very slow lorries on narrow roads. All the passes were good, but the main attraction for me was the Silvretta Hochalpenstrasse with excellent café and lake at the summit. Once more a toll was required but you could see why and yes it was worth it! 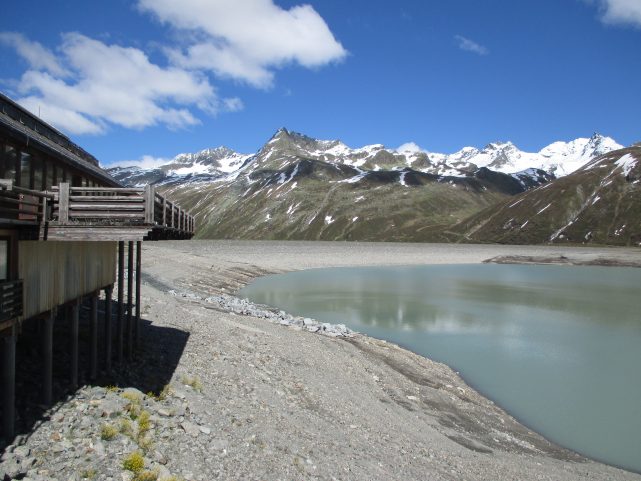 On Tuesday we went to the Timmelsjoch and stopped at the new Motorcycle Museum/café near the summit before returning for coffee and cakes at the hotel.

On Wednesday we went south along the valley to glacier and up the cable car to the summit. What a view over the Italian Tyrol! 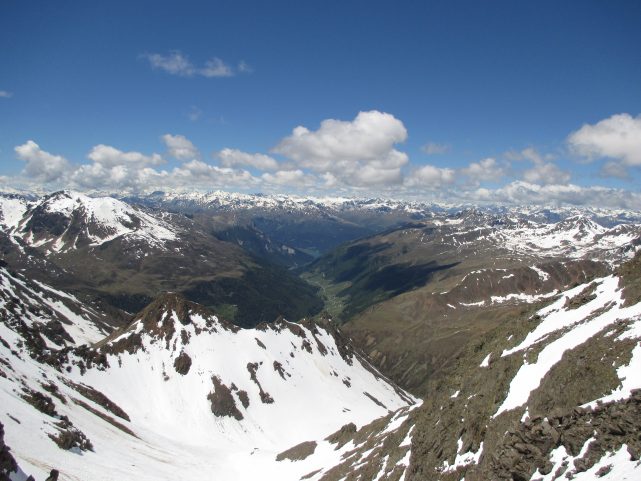 The sky was azure blue with hardly a cloud. On the boardwalk it was possible to have one foot in Austria and the other in Italy. Andy came as my pillion and seemed to enjoy the ride. This was purposely not a long day although we did visit the distillery for some to buy schnapps or liqueurs… 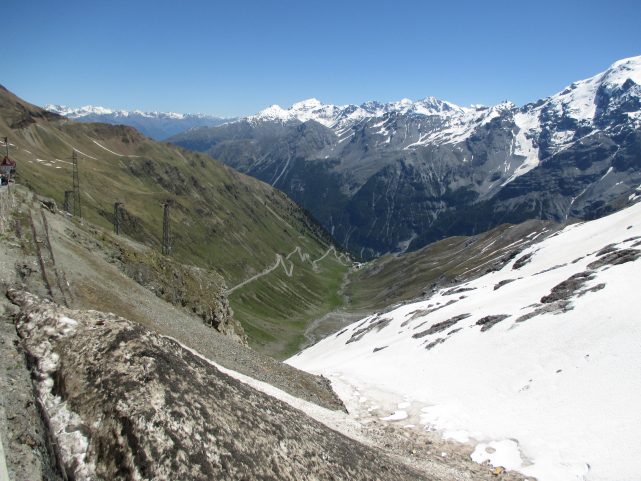 Looking back down the STELVIO from summit.

On Thursday, the faster group set off on Tour 4 “Konigsetappe – Stilfersjoch” (AKA The STELVIO) We stopped for a coffee when the slower group when sailing past us! Talk about tortoise and hare! A small diversion into a dead end car park over a gravel stretch later, we finally reached the foot of the Stelvio Pass. All the faster group made it to the summit. 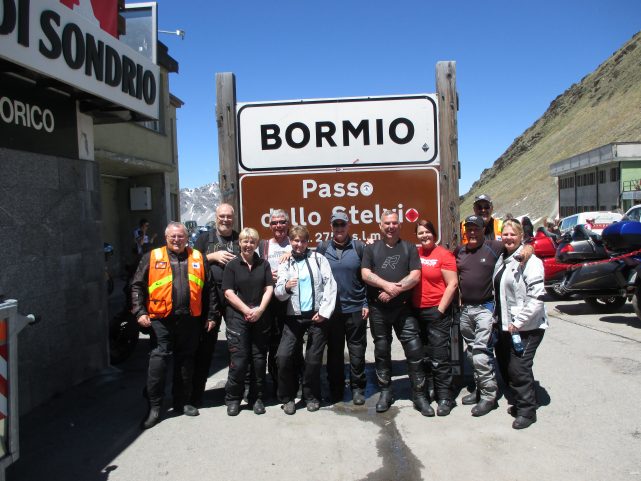 Many of the slower group made it up most of the pass. I must say it was very hot, the road was crowded with other bikes, cars and cyclists so concentration was key. I did make it to the summit of the pass, although not up to the Tibet Restaurant. After a cool Fanta or two (other drinks were available) and a bratwurst I was ready for the rest of the journey. Ray led us down the pass towards Bormio. The most stressful part for me was riding downhill through twisty unlit tunnels which were narrow and with uneven road surfaces and cyclists without lights in the mix.
Eventually we regrouped and hung a right turn towards a great stop for Ica da Crema! After Livigno we stopped for a while beside the Lago di Livigno before entering the Tunnel dal Gal.

Why are we waiting?

The cool temperature in the tunnel was much appreciated after queueing in the 30+degrees C outside. A steady pace from there back to the hotel with a rehydration stop required.

The hotel exceeded all my expectations for location, comfort, service as well as food and drink. We were exceptionally well looked after all week. Charly gave us excellent advice about which routes to use and a reliable weather forecast. He even came with us to Innsbruck on a coach trip on our last day giving us some of the history of the hotel and its development to date. This was a great way to unwind at the end of the week before heading home. Our coach driver gave us a guided tour of the city before dropping us by the funicular railway for a ride up the mountain. Rail and two cable cars later we were basking in the sunshine looking over the Inn valley and across the Italian Tyrol. Snowcapped peaks were much in evidence and some of the group made snowballs…

Special mention to Ken Bridgett of North East Section and Chris and Hazel Bullock of London Section who joined our group for the week and to Oxford members Chris and Brian who managed to join us for 4 nights. It was good to meet up with you and share some of the rides together. You even apeared to be enjoying yourselves – always a bonus.
Several folks mentioned that they would love to return for another visit… 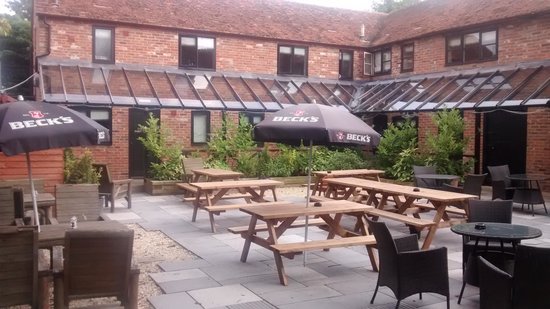 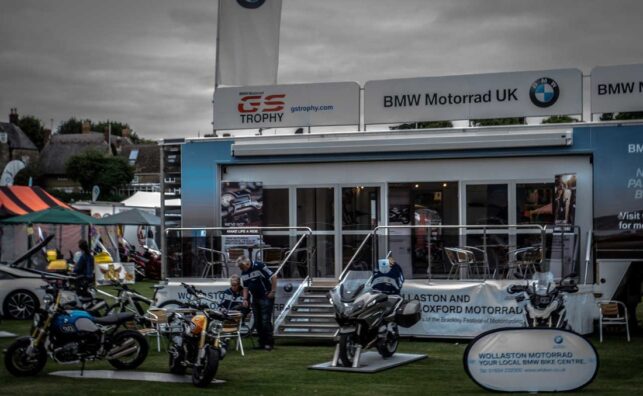