Several members from the Oxford section manned the Carterton checkpoint from 2pm on Saturday until 7am on Sunday morning, much banter and refreshments with the arriving and departing motorcycles – a great way to meet people.

Why do they do it, some quotes from the arrivals: –

Because it is what I enjoy – riding my bike on different roads, in different parts of the country on one of the longest days of the year. Allowing me to meet old friends who compete in the rally, meet the volunteers who sand by the control and provide the witty banter and refreshments, which make the event what it is and at the same time making new friends as the popularity of the rally increases.

Because riding through the night from dusk to dawn on quiet roads with little or no traffic is a rare pleasure in this over populated, over congested country. Early evening Saturday the roads become less busy and you are able to concentrate on enjoying the ride more and worry about the traffic less.

Enabling an all too brief view of some stunning scenery. Choose the right roads, staying off the motorways and dual carriage ways, at the right time, of the day or night, you can literally ride for miles and the only vehicles you will see are other bikes on the event. With only a few hours of total darkness because it is mid-summer, late night becomes early morning very quickly and any signs of tiredness reduce as light increases.

Watch this space, the Oxford section may enter a team next year….. 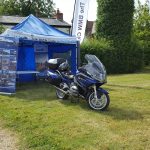 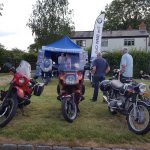 By the time john Broad arrived the team of Dave Shanks and Ian Cummins had already set the stand up and were getting to receive visitors. Like many of these events the numbers of people and bikes increases without anyone really noticing except that you become aware of the bike parking space rapidly being filled with some great machines. David & Rosemary arrived on their nice vintage BMW and immediately set about marketing the Club and section.

Having the stand next to the fish and chip wagon was just too tempting to ignore and, yes, the fish was very good. Another source of truly excellent food was the stand run by the locals selling fantastic home cooked cakes with a cup of tea and proceeds going to a charity. Right next to this stand the live musicians were pounding out all those toe tapping tunes from the rock and roll era.

Walking back to the Club stand takes ages as the range of machines require further inspection. Everything from our friend from Bicester, Norman Smith with his 1950’s Cyclemaster and the bicycle having the brushes and advertising for a chimney sweep, a lovely little Brockhouse Corgi and right up to some massive Trikes and custom Harley’s with everything in between.

Visitors to the stand showed interest in the range of BMW’s on show with the R Nine T attracting the eyes of young and old. This event is not so packed or frantic as Cassington but is a great place to meet old friends and make new ones.

Our thanks to John Broad, Dave hanks, Ian Cummings and of course Dave and Rosemary Hicks for organising and supporting the event.

Having found out 3 days before the ride that the planned route and roads around the South of Wales to venture upon where going to be closed due to a serious cycling event, an alternative had to be planned using the only road that was still open from the original planning, and with the first café informing me the day before that they decided that they could not facilitate a large group of bikes, all seemed to be going so well!

But perseverance paid off and a new planned ride entitled the ‘Brecon Loop’ as I like to refer to it was now the aspiration of the July Oxford BMW group ride out.

A majority of the group met at the Peartree Services area and were escorted to the second meeting point at the Burford Garden Centre, this was to be the starting point for the planned ride heading West into Wales. A fine group of merry folks arrived and seemed keen to take advantage of the glorious dry and the not too hot weather for the ride out.

Following a ride brief with details of the route and stops, the duration of the ride and also printed details of such, including a map were circulated for awareness should some be interested or have concerns regarding the venture.

All gathered we started well maintaining a reasonable formation for a large group heading West to eat the miles along the A40 to get into Wales as soon as we could, to then enjoy the roads and scenery. Blessed with light traffic we arrived at the first stop at the Fairview Garden Centre North West of Gloucester in good time. Although a small café on site it provided a reasonable service for all and a welcome leg stretch and of course some did take advantage of cakes even though lunch was only over the horizon, so to speak.

We all left the spacious parking area and headed out for the scheduled midday lunch stop, a well-known and highly recommended café called the ‘Steel Horse Café’.

We were not disappointed with the chosen lunch stop, the food was excellent, freshly cooked and tasty, with a pleasant service and biker kindred spirit for those who ride the steel ‘horses’. Some did choose to return home at this point due to other commitments and journey times, but seemed to have enjoyed the ride and food stops voicing their gratitude.

Leaving, the group made their way, after a short detour with the leaders SatNav automatically rerouting back to Oxford! To then travel on to the desired route West and then North up the A4059. This A road was the whole aim of the ride to experience an enjoyable bendy road with little traffic, just traffic savvy sheep wondering freely across the land! Recommended in the AA Bikers Guide, it did not disappoint. Joining the main A470, after the ‘twisty’s’ the group then stopped at Hills café at Bishops Meadow, just North of Brecon.

This was the final stop and sitting on a sun blessed terrace the remaining group were able to relax and reflect upon the day’s ride, eating and drinking. This was to be, by general consensus, the desired end of the ride with each choosing to ‘bomb burst’ away on chosen routes back to their own homes, enjoying which ever roads that were taken.

It was an enjoyable days riding and all seemed content that they had taken part in some or all of the route planned, with more importantly all being impressed with the mid-day lunches that were ordered!

Our thanks to David for an excellent day out and the kind weather conditions!

Unfortunately, Rob was incapacitated for this year’s event, however Graham very kindly stepped into the breech.

The Oxford Section was duly erected for the bike night, Unfortunately the weather spoiled the event and the evening was quite quiet with a distinct lack of bikes and visiting public due to the torrential rain, but who could blame them.

Many thanks to Graham and Rob for their stirling efforts putting this event together and manning it.

One of numerous special evenings to celebrate the 50th Anniversary of the section, well organised and supported and a great evening had by all who attended the Barn dance in Wootton. Thanks also to Dave Shanks for dealing with the kitchen… Wendy Ottaway for her endless energy in organising the event and being a lovely hostess.

Another one of our 50 year celebrations…  Something a bit different (for most of us) A barn Dance.

I’ll start by thanking those who made the night a success.  Firstly, and most important “All “of those who attended, special thanks to the helpers in the kitchen, Big and little Dave, Rosemary and Fiona, also Sue, Jean, Bob and Geoff for security and setting up. Sorry and thank-you if I’ve forgotten anyone else.

The band Ted Morse and his band were very patient and forgiving of our lack of understanding of simple instructions, a bit like a ride out really.

The Dancing, I use the term loosely, holding hands, skipping arm in arm, whilst dozy doeing, through chains under arches and swinging one another round and round, even us girls managed to get in and have a go with them!!.

All of those who could, had a go, and from the number of smiles and laughter, seemed to be enjoying themselves, although a small amount of alcohol consumed may have had something to do with it. All in all new experiences and an enjoyable evening out with mates, thanks again to all those who participated.

Martin Skennerton kindly brought the Oxford Section gazebo, banners etc.  With help from other members we had the stand set by about 8:15 am. It was a bit quiet until about 10:30 when a few more Oxford members joined us later. It was a busy day we had quite a few enquiries from various potential members. We took it in turns to look around the town many bikes of all shapes and sizes. We managed to get everything packed away just before the rain came and looking forward to better weather next year!

Many thanks to John, Martin, Ian and Daffyd for their stirling efforts putting this event together and manning it.

We have established a small ‘Expert User Group’ of experienced Sat Nav users and James McMinn hosted our first meeting at NOG. The meeting was very useful and we have a preliminary plan.

I am pleased to announce that we are now ready to take the next step. We all decided that it is very important that we survey the Oxford Section membership to get some feedback on what people are using their Sat Navs for and what areas they find difficult. We will then aim to address these problems through training, help guides, Q&A forum amongst other ideas.