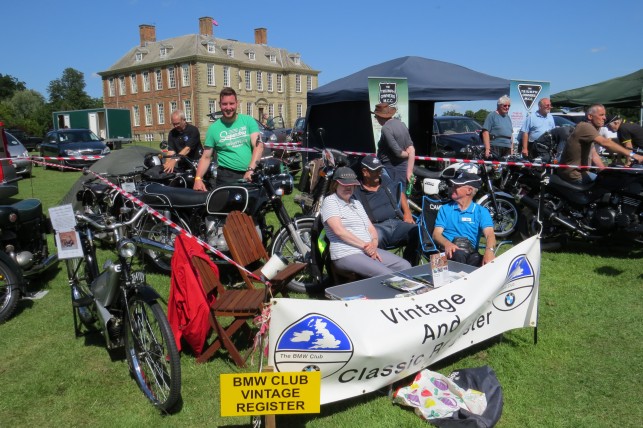 I think I ought to call this report “the best laid plans” as with many plans things change and the plan has to adapt to suit. It all started well with a good pitch for the Section stand on the long stretch of grass in Ludgershall village for their bike night on the 6th July. Some really nice bikes and we met lots of great people, some of whom joined the club and so welcome to you. Dare I mention the chap who complained that he joined the club and went along to a pub social where a few BMW bikes were parked outside but no one spoke to him? When he explained where the pub was we realised he had gone to the only other pub in the village and the BMW riders were not part of the Club meeting. At least he could chuckle over that and promptly rejoined; welcome and we look forward to meeting you at one of the ‘real’ pub socials soon.

The July ride out on the 12th was led by Willem Van Zyl and, in the way of “the best laid plans”, he didn’t go anywhere near Hereford as shown in the Journal but took a group of around 20 people to a Cider Brewery at Much Marcle. With the options of a tour of the cider works and a gift, or a tour and special lunch, the location ‘catered’ for all tastes. From some of the comments made afterwards everyone really enjoyed the visit and of course, when they got home, the fruits of the apple that had a bit of a kick. I know Willem was a bit nervous about leading a run but he has proved by this very good route and a very “interesting”(?) destination that we will call on his new found expertise for another run soon.

A couple of days later on the 14th July had the team congregating on the green by the Horse & Harrow pub for the annual bike night at West Hagbourne which Rob Allin had arranged. Another of those “best laid plans” as the evening drew on so did the drizzle! The event was still very well attended with a fine collection of vintage GP bikes parked by the pub and some interesting old bikes in the car park. The machines that surprised me the most were an Ariel Pixie strapped to the back of an Austin Westminster, both machines being rare. In spite of the weather the Oxford Section and the green had a superb collection of old and new BMW’s on show, the star being Liam Conroy and family with their fine old Sidecar outfit. Our thanks go to Rob Allin for arranging the site and to Rosemary & David Hicks for attending to the many visitors to the stand in spite of the dampness during the evening.

Amazing how the weather was truly awful on the Friday before the Calne Bike day on the 25th July and again on the Sunday afterwards but the team had a great time on the Saturday of the event in glorious sunshine. Welcome to the 6 new members who joined up on the day, we’re sure you will enjoy many of the events and social activities. We wish our normal organiser of this event, John Russ a speedy full recovery from having his upper leg bearing replaced and the team who erected and manned the stand did a fine job in assisting him. Thanks must go to those who exhibited their machines on the stand and special thanks to Andrew Byatt for presenting his machine just as it was on completion of his ride from John O’ Groats to Lands End. It goes to show that a bike showing the dirt of an expedition can have more draw than a shiny one sometimes.

Up at the stately home of Stanford Hall on the 19th July was another fine and sunny day for the Taverners section of the VMCC to hold their Founders Day. The recently “volunteered” Vintage Section coordinator, John Wheeler had arranged for a BMW Vintage Section Club stand. Another of those “best laid plans” moments occurred as the gazebo not only proved to be bigger than the stand space but the gusty wind prevented any attempts to try to erect it! Not a major issue though as the nice collection of vintage bikes and the “Vintage” banner drew in many visitors. John was ably supported by David & Rosemary Hicks plus David Shanks along with other fine members. Although a bit chilly in the morning it was warm enough in the afternoon to cause a certain drowsiness amongst some people!?

Another of those “best laid plans” moments occurred when a group decided to ride up to Wellesbourne to see the Vulcan on its last year of flying. Just near North Oxford Garage John Dillon suffered a puncture to the rear tyre and for the lack of a suitable repair device had to be recovered. The others did just make it in time but this incident has had a silver lining as Steve has managed a discount for an excellent piece of kit called the ‘Stop & Go repair Kit’. You can see a video of how the system works using mushroom headed plugs by going to https://bmwcluboxford.com/?p=5172

To get your discount go to the link http://www.sportouring.co.uk/product-category/accessories/tyre-care/ and enter the discount code ‘bmwclub1’ when you checkout. Steve suggests you may wish to look at the ‘Rocky Creek portable compressor’ as well to make re-inflation easy. Our thanks go to Mike at Sport Touring for this offer.

Looking further afield, John Ottaway was in the Balkans a few weeks ago as he continues his grand European Tour and he keeps us up to date with his regular face book messages and pictures.

Our chairman Steve Moxey and his wife Catherine will have completed a tour of Scandinavia by the time you read this. They managed to make it to the most northern point in mainland Europe that you can drive to at the North Cape. Riding up the coast of Norway and back down through Finland and Sweden can have magnificent scenery, but only if the weather behaves. It did seem to be a bit cold and wet for a lot of the time from his reports! We wait for Steve’s telling of their travels in the land of Trolls!

Looking to the next events for the section we have another of those “the best laid plans” with the Section BBQ on the 9th August relocated to the Savernake Forest and not the kind offer from Paul Prictor of Bupton Farm as shown in the Diary and Journal earlier. Whilst the forest location seemed good it would appear that the Forestry Commission in their wisdom have set up barriers to cars getting onto the BBQ areas. I will be reporting on this event in the next exciting instalment of “the best laid plans” in next month’s Journal. Geoff Clough will be leading the ride from Pear Tree roundabout to the BBQ and not from either Newbury Wharf or Tothill Services as advertised in various emails; yet another of those “best laid plans” moments that will be OK on the day.

North Oxford Garage will be leading a run up to Stratford Upon Avon on the evening of Thursday 13th August and another Fish & Chip run on Thursday the 10th September; call 01865 319000 for more information.

As August rolls on by we can look forward to a stand at the Brackley Festival of Motorcycling on the 16th and I just hope all the planets align to prevent many more of those “best laid plans” from going awry.

September 13th will be the next ride out, this time arranged by Tim Bolderstone. In a kind of reversed version of “the best laid plans”, the event was advertised in the diary as the ‘annual mystery ride’ with no plan whereas Tim has a real plan to go to the Watercress Line. The starting point at the Waterfront Café at Benson is an excellent location.

The BMW Club National Rally is planned to be relatively close to us at Sparsholt College, near Winchester from Friday 28th to Monday 31st August. No excuses get down there and add your support!

Looking even further ahead the Oxford Section trips in 2016 are being planned to be Austria in June and another to Italy & Sicily in September and you can find more information at https://bmwcluboxford.com/?p=5179 or from Rosemary.

Closer to home I am looking out for anyone who would like to lead a 2nd Sunday ride out, or one on any day during 2016 please; contact details below.

And to finish, my brother and I attended the first of the new courses run by Oxfordshire Fire & Rescue Service called “Biker Down”, which was excellent and they are keen to get as many of the section members who may be interested to attend future events; I’ll be sending out the dates when I receive them. In the meantime, I like the logo on the card from the Station Manager at Kidlington that we all need to strive for “365 alive”!