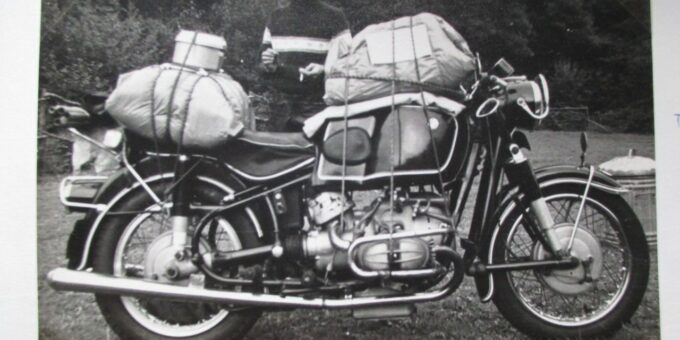 If a cartoonist were to draw a caricature of the BMW opposed-twin he would probably conceive of it as a low flying one man cargo plane, skimming along above the road surface, using its horizontal cylinders as stubby wings. The Bee-Em is a travelling man’s machine and back in 1967 the “travelingest” one of the series was the 593cc R69S.

Looking at an old Cycle World road test report (see below for full report) one would wonder how this massive-looking non-sporting Sport built such a fantastic legend for itself among the far-flung touring clan. Perhaps one must ask the seasoned traveler what he wants in a motorcycle for touring. Firstly, he wants reliability. Secondly, he wants a big machine with plenty of reserve power, one that will cruise all day at the legal limit (or higher if nobody’s looking). The R69S has it in spades and boils along happily at just over 100mph.

And then there is the ride. One would expect such a big motorcycle to be a handful, but this is not the case. Once it is rolling, the machine steers lightly and tracks well. It is also a very easy machine to ride at snail’s pace in traffic. Much of this lightness of feel and slow speed stability is owing to the low centre of gravity offered by the opposed twin design. The soft ride is further enhanced by the big dual seat, comfortable for both rider and passenger.

Combine the small features with the ride and the machine’s ability to run all day at any speed demanded of it, and one has the near-perfect choice in a machine for serious travelling.

The current widely accepted best BMW Tourer is arguably the R1200RT. The latest version with liquid cooled engine has excellent performance, superb road holding and will transport rider and passenger all day in true comfort. The weather protection is remarkable. The wind noise just disappears when you push the button to raise the electric screen. Panniers and an optional large topbox make touring easy to accomplish without too many sacrifices in what to pack and what to leave behind!

Some may suggest that the build quality is not as good as 50 years ago, but how true this is of most things in life. Engineering nowadays has advanced so much and we tend to take all the benefits of fuel injection, electronic engine management, integrated satellite navigation and communication systems for granted.

In conclusion, I’m at my happiest riding my BMW R1200RT knowing that whether I’m going short distance on a day trip, or for a ten day tour, I will arrive in comfort ready for more the next day.