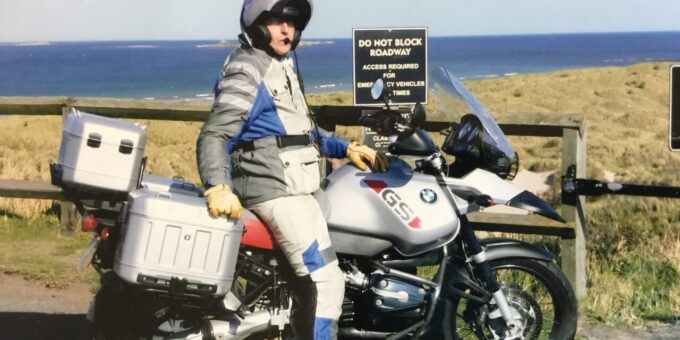 My first BMW was a long time and a lot of BMWs ago, but my first motorbike was even longer ago, a second hand BSA Bantam. Coming from a motorcycling family it was only natural that I’d go that way, but then fate takes a hand and a life choice to join the Royal Air Force as an Aircraft Apprentice stepped in and motorcycling took a back seat as we were not allowed any form of personal transport and particularly not motorbikes, so it had to go. Graduation, postings, marriage and a family shaped all aspects of life and one day whilst saving hard to buy a house a for sale notice appeared on the Sqn board for a Honda 400 Super Dream, helmet and barber jacket included. This seemed a bargain and cheaper to run on a daily basis than the car back and forth to work. It didn’t take long for the old enjoyment to return and soon I was taking different routes just for the fun of it.

Another posting and a mortgage meant longer journeys so the 400 was traded for a CX 500B on HP. This tough liquid cooled and shaft driven machine favoured by motorcycle couriers was in a different league once the Bridgestone Gripless tyres were replaced with Pirellis. Then a pal suggested a trial swap, my CX for his ex-police R100 RT. Chalk and cheese the R100 was quick and a good bit lighter, the seed had been sown. That was compounded by an Easter W/E with good weather and both lads away with the scouts. By now I had my CX back and suggested going away camping on the bike. A chance meeting with another couple on the same site riding a newer R100RT probably unwittingly sealed the deal. The CX lasted about another 9 months and the urge to own a BMW grew beyond reason. Here circumstances intervened again and on one of my visits to a local dealership, there for sale was a nearly brand new R80RT Monoshock that the dealer had bought for himself but “hated”. As a local Star Rider Instructor a deal was quickly done.

Not long after I joined the BMW Club and Mo and I travelled extensively on that machine including to the South of France. BMW had contemplated killing off the boxer in favour of the 4-cylinder K series, but there was such a worldwide outcry from enthusiasts a new lease of life was breathed into the model and the R80 Monoshock was the start. That was followed by buying an R100RT Mono and I lowered the suspension on the R80, fitted a “Surefoot Side Stand and I chopped the seat for Mo to ride it herself.

Our longest trip together was to Finland via Germany, up to the arctic circle, around the top, down through Sweden, Denmark, Germany and home over 3 weeks, camping all the way. Next came a K100RT and we covered some miles around Europe on that over the next 3 years. This was eventually traded in for a K1100LT which was heavier, but instinctively a better bike in my view and smoother 2 up. The down side was that it developed oil leaks from the rear diff housing diagnosed as a failure of the Git seal.

Once bad luck, twice concerned me and on the third occasion anchoring up for the A14 /A1 round a bout there was not much assistance from the rear brake. Arriving outside my accommodation on the base and dismounting it was plain to see that the 3rd git seal had blown big time and the rear disc and tyre were covered in oil. Being under warranty the dealer collected it that morning leaving me with a K100RS. BMW took charge and changed the whole drive shaft and diff, fitted a new disc and pads and replaced the tyre. We travelled to Sardinia via Corsica on that machine and never had any more trouble with it, but this was the second machine with painted panniers and the ferry from Corsica to Sardinia was an ex Isle of Wight Ferry, I kid you not. They wanted to lash it to the steel side of the hull and there was a stand off until they produced some cushions to protect the paintwork. Not a happy bunny. The K1100LT was eventually traded in for the new model R1100RT about the time I left the RAF

A machine with a much sexier fairing, lighter and a truly great bike. Having retired from the services I was determined to do something different and had a hankering to ride the Alaskan Highway and to do that I wanted an R100GS Paris Dakar. Not that easy to come by, those that owned one would not part with them and there were no more being produced so I put the word around as many dealers as I could. Eventually a call from Nigel Darkin of Sawbridgeworth BMW, advised that he had one the owner needed to sell, 12 months old with 1,200 miles on the clock.

I got a lift over to the showroom and minutes later knowing it was just perfect the deal was done for me to ride it home. Over the next few months I equipped it with Touratech Panniers and a few other over lander modifications, met and joined a like-minded group and the plans were laid for the adventure of a lifetime. The trip is a story itself for another day. On that bike Mo and I travelled down to Lisbon, shipped it over to the USA twice for 3-4 week trips enjoying it immensely.

Then I sold the R1100RT for the new R1150GS Adventure, another formidable machine which we did a third USA trip on as well as many other adventures into Europe. Why 2 GS’s I was nagged so I eventually sold Paris Dakar to a good friend, who still has it, a decision I’ve long regretted.

The 1150GS was traded in for a new R1200GS Adventure and the long trips continued around Europe. It was a bike I probably owned longer than any other and sold to try something different such as the F800GS Adventure, lighter yes, but hard work riding with a group on 1200’s of any description. A trip up to Scotland and back, then down to the south of Spain convinced me it wasn’t for me or us. That was traded in for a new 1200GS and that subsequently traded in for a new R1200GS Adventure which I still have alongside a Paris Dakar requiring some attention, an R100 GS and stripped down for full restoration an R100RS Motor Sport of which I believe only about 200 were made.

Which is my favourite? Horses for courses really, loved most of them, but the Paris Dakar is right up there as a characterful, reliable workhorse which any half decent mechanic can self-fix, unlike the modern computer controlled machinery. Don’t get me wrong I love the 1200 Adventure because on my own I can depart Santander and ride the 587 miles to the Costa Blanca in a day with 1 fuel stop and a couple of quick coffee stops.